There are four Republican candidates running in the August 14 Primary of the SC State Senate District 20 Special Election.

Two* of these Republican candidates are confirmed supporters of SC Personhood Legislation:

The purpose of Personhood legislation is to establish justice for all pre-birth human beings, recognizing  the Creator God-given unalienable right to life of every human being as a “person”, in law, at fertilization, and that without exception, because God’s Word says, “Thou shalt not kill (murder).”  Exodus 20:13, KJV

SC Senate District #20 includes parts of both Richland and Lexington Counties, running from White Rock to Ballentine and Irmo, along I-26 and I-126, thru downtown Columbia, continuing southeast thru Shandon and other Columbia neighborhoods to I-77, and vicinity [ Map ].

Christian believes that “life begins at conception.” He says we have a “responsibility to the unborn” and that the “unborn should be protected.” He says in the law a person “can be charged with a crime if we kill a fetus.” He emphasized that abortion is a “federally driven issue” but that the “5th and 14th Amendments say each person has a right to life.”

Regarding the recent Greenville Women’s Clinic news violating state law concerning improper disposal of aborted babies as “medical waste”, he said it was “reprehensible to God’s creation.” Stegmaier emphasized that as a people we must “return to a notion of accountability.” He said he believes in “personhood of the fetus.” 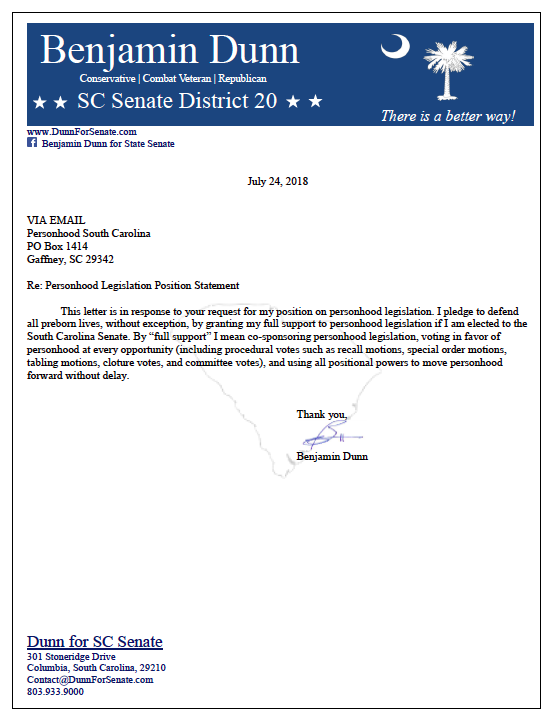