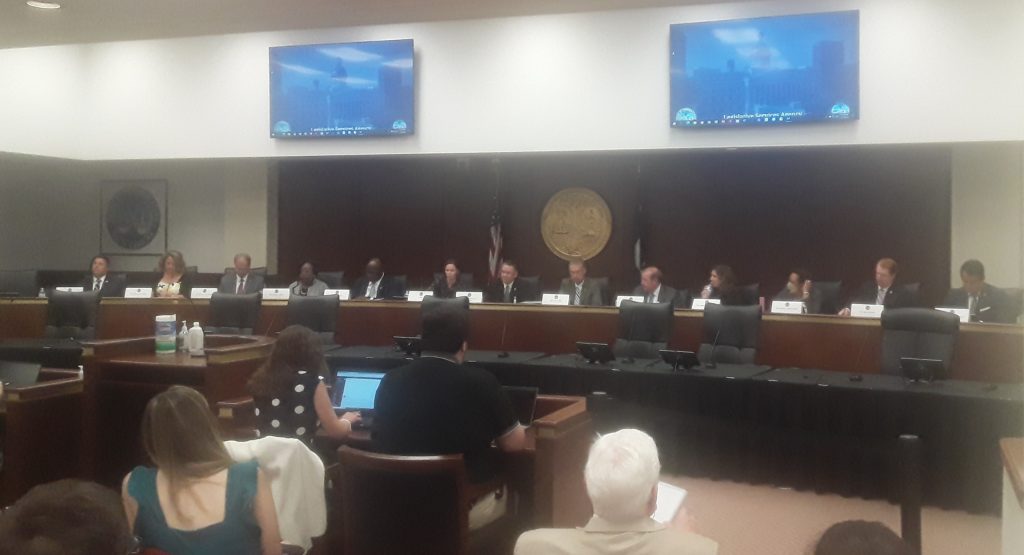 On July 19, 2022, by vote of 9 [ 8R, 1D ] to 3 [ 3D ], the Ad Hoc Committee on “abortion” legislation proposed language for H5399 which, the unenforceable words of the Legislative “Findings” notwithstanding, does not statutorily recognize the Unborn as Persons, and therefore, in actuality, denies Equal Protection for ALL Unborn Children.

The Ad Hoc Committee has essentially served as a drafting committee to propose language for H5399. Their recommendation adopted July 19 now goes to the SC House Judiciary Committee for the bill process to continue.

The proposed language for H5399 adopted July 19 by the Ad Hoc Committee:

– Bans nearly all “abortions” committed by surgical and RU486 means, including for children conceived in cases of rape and incest, and those who are handicapped ( so-called “fetal anomalies” [sic] ).

– Does not entirely ban intentionally killing the baby for the morally and ethically unacceptable, as well as false, medically unnecessary excuses of saving the life, or preventing “substantial and irreversible physical impairment” of the mother. This is similar to the unbiblical, unjust position of National Right to Life and their SC Chapter, SC Citizens for Life. In this context of the life/serious health of the mother, the proposed language for H5399 does state, “… when an unborn child is alive in utero, the physician must make all reasonable efforts to deliver and save the life of an unborn child during the process of separating the unborn child from the pregnant woman”; however it continues, “to the extent it does not adversely affect the life or health of the pregnant woman, and in a manner consistent with reasonable medical practice” [Section 44-41-830(C)]. This latter wording leaves open the possibility and availability of  intentionally killing the baby by “abortion”, and in fact the proposed language for H5399 actually uses the term “permitted abortion” in Section 44-41-830(B). However, it is not medically necessary to intentionally kill the unborn child to save the life of the mother [See DublinDeclaration.com, with over 1,000 medical field signatories; and as posted here. See also quotes from Dr. C. Everett Koop, pediatric surgeon, former United States Surgeon General (1982-1989) as posted here.].

– Criminalizes the abortionist; and, after due process, also provides for revocation of the abortionist’s physician’s license by the State Board of Medical Examiners for South Carolina.

– Does not criminalize the mother soliciting the “abortion”. This is consistent with the unbiblical, unjust position of National Right to Life and their SC Chapter, SC Citizens for Life.

– Does not ban chemical “abortions” by abortifacient “birth control“.

– Does not ban in vitro fertilization (IVF). Does ban the wicked IVF practice of “selective reduction”, that is, of stopping [ “aborting” ] “the development of one or more [ implanted ] fetuses in utero“.

Voting “Aye” in support of the Recommended Language for “Abortion” Legislation were these SC House members:

Voting “No/Nay” against the Recommended Language for “Abortion” Legislation were these SC House members:

WLTX
‘SC House Committee recommends [ near total surgical/RU486 ] abortion ban, no exceptions for rape or incest’
The proposal includes protections [sic] for the life and health of the mother as well as contraception and in-vitro fertilization.
July 19, 2022
https://www.wltx.com/article/news/politics/no-exceptions-for-rape-or-incest-in-near-total-sc-abortion-ban/101-f81af3e0-b4f1-4220-96f9-95d8b8175bd3

Greenville News
‘Proposed SC [ near total surgical/RU486 ] abortion ban does not include exceptions for survivors of sexual assault’
July 19, 2022
https://www.greenvilleonline.com/story/news/local/south-carolina/2022/07/19/sc-abortion-ban-under-consideration-house-representatives-committee-meets-again/10067517002/