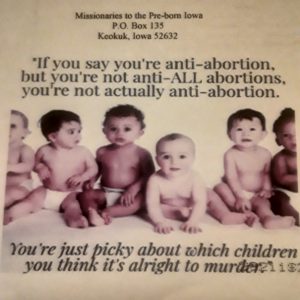 At least FOUR “Republican” [sic] Senators are already identified on the public record
as supporting allowing the murder of certain innocent babies based upon the crimes of their fathers:

Senator Davis co-sponsored an Amendment (1R011.KMM.ASM) with Senator Shane Massey adding rape and incest exceptions to the Heartbeat Bill S1. It was approved by a quick voice vote which avoided Senators’ accountability. This should have been a Roll Call vote, however more conservative Senators failed to react in time to request that. 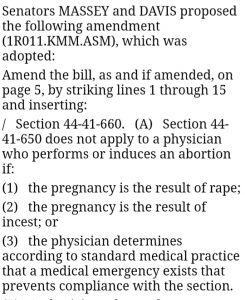 “In his 90-second speech proposing the exceptions, Senate Majority Leader Shane Massey also suggested requiring doctors to report any rape or incest cases to law enforcement. The Republican from Edgefield folded his notes, ended the remarks without any flourish and asked that his amendment be approved. Senate President Harvey Peeler didn’t pause, asking for senators to vote “aye” or “nay” out loud and then ruling the amendment passed.”

“After fighting off the exceptions in committee meetings twice before, conservatives seemed
surprised by the quick move. [ Senator Richard ] Cash later said he missed the vote and asked
to have it recorded that he opposed the exceptions.”

Senator Senn not only supports exceptions, but supports child-murder by “abortion” all the way through the 1st trimester. She voted against the weak, unjust, incremental Heartbeat Bill S1 on both Second (1/27/2021) and Third (1/28/2021) Readings not because it was weak and unjust, but because for her it was too “pro-life” [sic], and not pro-“abortion” enough. The Charleston Planned Parenthood child-extermination murder center ( 1312 Ashley River Road, Charleston, SC 29407 ) is located in Senator Senn’s Senate District #41. Consider the fact that if Senator Senn had her wicked way, and “abortions” were to continue to be permitted all the way through the 1st trimester, that would basically mean present business-as-usual for her constituent Planned Parenthood.  Who would like to investigate the Campaign Disclosure Reports (including Contributors) of Senator Sandy Senn on the SC Ethics Commission website ? 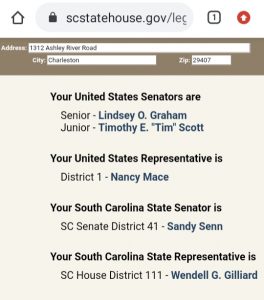