– The SC Personhood Act ( S .217) passed favorably out of a Senate Judiciary Subcommittee on Wednesday shortly before 11am, April 26, by a vote of 3 Yeas ( Rice , Gambrell, Talley) to 2 Nays (Bright Matthews, McLeod).

– The April 26 meeting was scheduled to convene at 9am, but was started about 15 minutes late.  The full Senate was scheduled to go into session in the Senate chamber over at the State House at 11am, which placed a specific time limit on the length of the S .217 Subcommittee hearing.

– The hearing room was changed only the day before ( 4/25 ) to Room 209, which is the same size as the prior Room 207, with an audience seating capacity of just 50 ( The March 30 S .217 hearing was held in Room 308 with an audience seating capacity of 90, and there were people standing along two walls and overflowing out into the hallway at the March 30 S .217 hearing. ).  On Wednesday, Room 209 was filled including a few spots for standing room, and then there were many other people still out in the hallway. 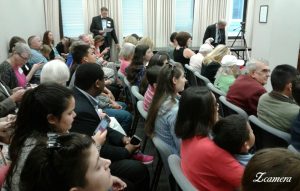 – Four of those who were allowed to speak in support of the SC Personhood Act ( S .217) were Eva Edl, Johnny Gardner, Rolf Baghdady, and Richard Cash.  The videos of their testimonies are available below:

Eva Edl –  82 years old, survivor of a Communist death camp in Yugoslavia at end of WW2 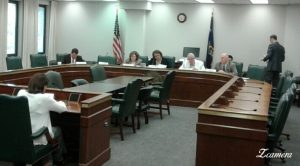 Johnny Gardner – director of Voice of the Unborn

( Several other supporters of the SC Personhood Act ( S .217) were present who were also signed up to speak, but who were not afforded that opportunity by the Subcommittee chairwoman Senator Bright Matthews [ D – appointed by “Republican” Senator Luke Rankin (R-Horry) ]. )

After the conclusion of the SC Personhood Act ( S .217) Judiciary Subcommittee, and the vote to pass S .217 favorably: From Left to Right, Pat Hunter, wife of Dr. Johnny Hunter, and  Eva Edl.  Dr. Johnny Hunter is the national director of the Life Education and Resource Netwlork (L.E.A.R.N.), a Christian, pro-life organization which focuses on reaching Christian black pastors to become involved in pro-life efforts ( Dr. Hunter was signed up to speak and had a short, one-page statement prepared, but was not afforded the opportunity to address the S .217 Subcommitee during the hearing.)
[ See  http://BlackGenocide.org ] 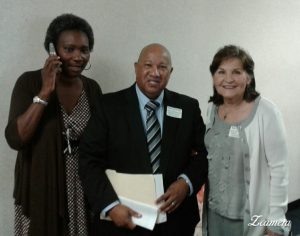 LEGAL EXPERTS SUPPORTING THE CONSTITUTIONALITY OF STATE-LEVEL PERSONHOOD LEGISLATION
IN SC (2001), MISS (2009), ALA (2011), and OK (2012):
– Herb Titus is an attorney, constitutional scholar, author, the founding Dean of College of Law/Gov’t at Regent University
– Mathew Staver is former Dean of the School of Law at Liberty University; and Liberty Counsel founder and chair
– Judge Roy Moore, Chief Justice of the Alabama Supreme Court, is President Emeritus of Foundation for Moral Law
April 5, 2016
http://christianlifeandliberty.net/2016-04-05-Legal-experts-supporting-constitutionality-of-State-level-Personhood-legislation-SC-MISS-ALA-OK-edited-Jan-27-2017.pdf

– Senator Luke Rankin (R – Horry) has still not signed on as a co-sponsor of S .217 SC Personhood Act.

– Senator Luke Rankin (R – Horry) has still not committed to vote for S .217 SC Personhood Act with no amendments in full Senate Judiciary Committee which he chairs.

2) Commit to vote in support of S.217 without any amendments in the full Judiciary Committee.

When calling/leaving messages/e-mailing, remind Senator Luke Rankin he voted in 2016 for the S.719 SC Personhood Amendment on April 12, 2016 ( Minutes p.5 ) in the full Senate Judiciary Committee; and remind Senator Rankin he also voted in 2016 for Special Order for the S.719 SC Personhood Amendment on the floor of the full SC Senate on May 11, 2016.  [ At the time 23-year incumbent Senator Rankin was facing Republican opposition from a Myrtle Beach Republican in the June 2016 Primary ].