The purpose of Personhood legislation is to establish justice for all pre-birth human beings, recognizing the Creator God-given unalienable right to life of every human being as a “person”, in law, at fertilization, and that without exception, because God’s Word says, “Thou shalt not kill (murder).”  Exodus 20:13, KJV

SC Senate District #20 includes parts of Richland and Lexington Counties; running from White Rock to Ballentine and Irmo, along I-26 and I-126, thru downtown Columbia, continuing southeast thru Shandon and other Columbia neighborhoods to I-77, and vicinity [ Map ].

Dunn says that “Roe v [W]ade may very well be overturned in the next few years. If so, it will be kicked back to the states to decide.” 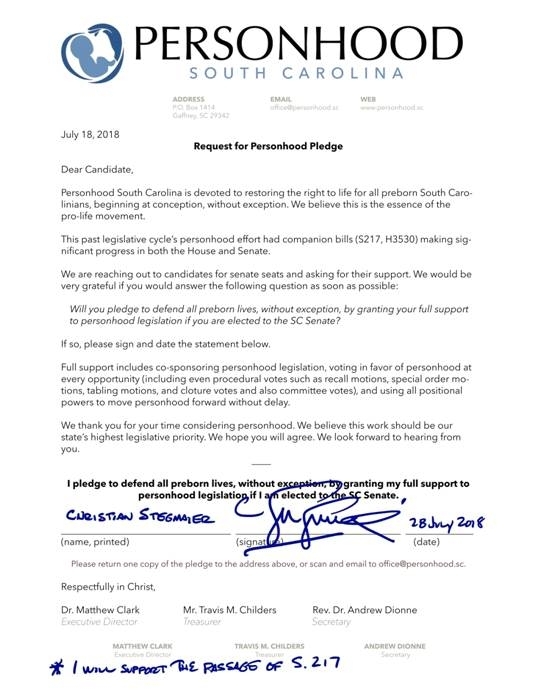 From Christians for Personhood:

The above “Dear Candidate” letter (July 18, 2018) from Personhood South Carolina contains this sentence: “This past legislative cycle’s personhood effort had companion bills (S217, H3530) making significant progress in both the House and Senate.” This statement is only half true.  It is true the Senate Bill S217 did see significant progress in the SC Senate in 2017-2018 Session: S217 passed Subcommittee after two public hearings, S217 passed the full Senate Judiciary Committee, S217 was placed on the full SC Senate calendar, and the Judiciary Committee Amendment to S217 was actually approved on the Senate floor.  However, the House Bill H3530 on the other hand, never even had a public hearing in 2017, or in 2018.  And the historical record shows public hearings in Subcommittee have been held in the past for the SC House personhood bill; in 2001, in 2004, in 2005, in 2008 (then-SC Attorney General Henry McMaster also testified at this hearing), and in 2010.  The SC House personhood bill passed out of Subcommittee in both 2004 and 2005.  In 2005, the personhood bill also passed the full House Judiciary Committee (still unamended), before being amended on the floor of the full SC House of Representatives with a fatal flaw so-called “morning-after-pill” (chemical abortifacient) rape “exception” [sic] amendment, then passed the full SC House of Representatives on Second and Third Readings, and was then sent to the SC Senate where two public hearings were held, no vote taken, and it died.