The Personhood Act of SC (S.217) favorably passed a five-man SC Senate Judiciary Subcommittee on April 26, 2017 by a vote of 3 Yeas ( Rice, Gambrell, Talley) to 2 Nays ( Bright Matthews, McLeod ).  Although S.217 was listed ninth ( Letter I ) on the Agenda of the full Senate Judiciary Committee on May 2, 2017, as S.217 was coming up for deliberation, Judiciary Committee Chairman Senator Luke Rankin (R-Horry) effectively unilaterally “carried over” ( with no vote by the committee members ) another bill and S.217, to take up other bills ( view Senator Rankin’s maneuver at: SC Legislature Video Archives – begin at 1:16:45 ).  Then at the very end of the committee meeting, Senator Rankin returned to S.217; however, the meeting had already run overtime, and two Republican Senators supporting S.217 had already left the committee meeting room.  So Senator Rice as S.217 lead sponsor, was forced into the necessarily wise decision to move to “carry over” the bill ( SC Legislature Video Archives – see video at 2:06:50 ), which is how regular 2017 Legislative Session work on bills ended for Senator Luke Rankin’s Judiciary Committee.

So Senator Rankin’s Session-long “slow-walk” of the bill ( including assigning pro-“abortion” Democrat Senator Margie Bright Matthews (D-Colleton) to be Subcommittee chairman ! ) was not successful in completely blocking the bill, but was successful in employing another RINO Senate tactic, of delaying the bill, as he had not even assigned the bill to a Judiciary Subcomm. until March 22, 2017, well over two months after S.217 was introduced by then-Senator Kevin Bryant ( now SC Lt Gov ), on the first day of the 2017 Legislative Session, January 10, 2017.  This is background for the 2018 SC Legislative Session, which begins January 9, 2018, and ends about four months later, May 10, 2018. The sprint to the end of this 2nd year of the two-year 2017-2018 Legislature means timely Senate action is critical !

With this understanding of the critical importance of timing in 2018, here are some broad benchmarks:

[ Rep. Greg Delleney, Chairman of the House Judiciary Committee has repeatedly promised passage in the House. ]

“Please know that I strongly support the Personhood Act (H.3530 and S.217) and look forward to signing it into law.”

Please go to http://www.scstatehouse.gov/, click on Senate Committees, then on Judiciary. We need calls now from constituents to the 12 Republican Senators listed (beside lead S.217 sponsor Rex Rice), urging them to support and vote for favorable passage of the Personhood Act of SC (S.217) with no “exceptions” amendments out of this Judiciary Committee by Tues., Jan. 16, 2018.  God’s Requirement for Murder is Justice ( Amos 5:15, KJV ).

[ This newsletter w/ hyperlinks is posted at: http://christianlifeandliberty.net, click on “Personhood Act” page, go to item #139. ]

Personhood SC has secured the commitment of SC Governor to sign the Personhood Act of SC ( S.719 / H .3530 ) into South Carolina Law !

“Please know that I strongly support the Personhood Act (H.3530 and S.217) and look forward to signing it into law. 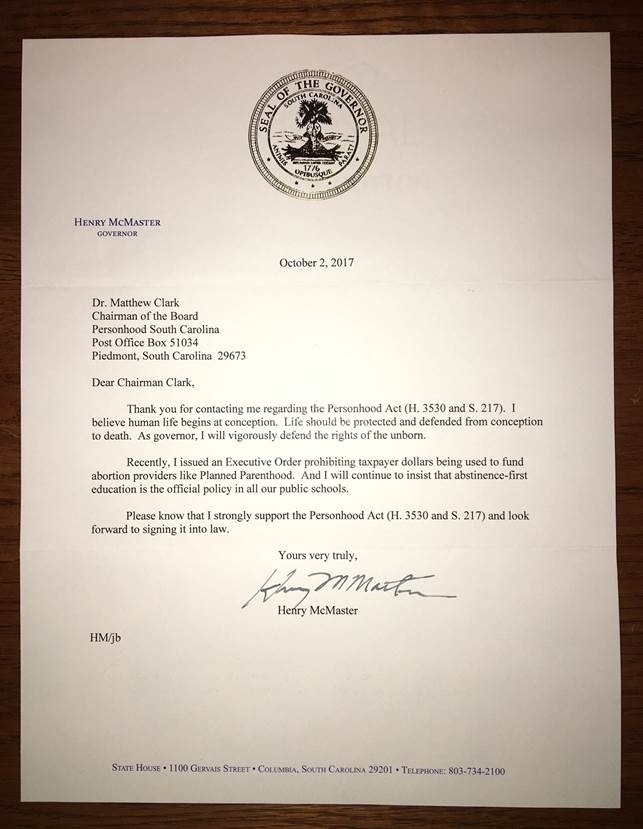 E-mail below from Personhood South Carolina:

View this email in your browser

We heard from another candidate in the upcoming race for SC Governor! Current SC Governor Henry McMaster affirmed our questions and has pledged his support of S.217/H.3530 and personhood legislation. Thank you, Gov. McMaster!

The Governor also sent us a wonderful letter, a portion of which we share with you:

“I believe human life begins at conception. Life should be protected and defended from conception to death. As governor I will vigorously defend the rights of the unborn…. Please know that I strongly support the Personhood Act and look forward to signing it into law.”

We are thankful for Gov. McMaster’s solid commitment to personhood legislation!

Our mailing address is: [ This has been edited ]
Personhood South Carolina
PO Box 1414
Gaffney, SC 29342

In Summary, three of the four Republican candidates for SC Governor support the Personhood Act:

Only Catherine Templeton does not support protecting all human beings in the womb.