[ Missing from back row: Ronnie Sabb (D-Williamsburg), Senator Chip Campsen (R-Charleston) – Note: both these were present for most of the meeting; the only absent Senator was Thomas McElveen (R-Sumter) ]

All 46 South Carolina Senators may be viewed here .  [ Note: Senator John Courson under indictment has been suspended ]

– On January 30, the SC Personhood Bill S .217 was listed first on the Senate Judiciary Comm. Agenda and was discussed for just over 1 1/2 hours before the 18-5 vote to “Carry Over” the S .217 bill until the next meeting.

– The next Senate Judiciary Committee meeting is Tuesday, February 6, beginning at 11:00 am, and S .217 is again on the Agenda, but this time is not listed at the top.

Chairman of the Senate Judiciary Committee Senator Rankin has not yet agreed to support S.217.

“I am a Republican, pro-life, and [ Roman ] Catholic.  I do not want to vote against a bill that encourages pro-life, but this bill is so far out of bounds as far as its constitutionality, I don’t think it can be retrieved,…”

– The committee room ( Gressette Room 105, below ) was filled to its approx. 100-seat capacity.
(It was also reported a separate overflow room had approx. 70 in attendance.) 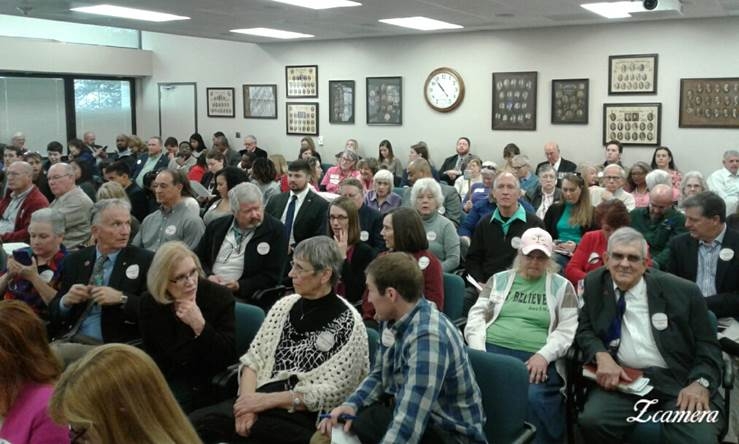 [ Selected approx. video times listed below facilitate viewing of selected comments of various Senators as identified; however, during some of the time periods listed below, more than only the identified Senator may have spoken. ]

[ Attorney, former Asst. Solicitor for 13th Circuit – good explanation of use of Personhood Act of SC as a vehicle to challenge Roe v Wade ]

[ Senate Judiciary Committee Chairman Luke Rankin’s (R-Horry) hand-picked pro-child-murder-by-“abortion” chairwoman of the 5-man Subcommittee which passed S .217 out of Subcommittee by a 3Y-2N vote last year, April 26, 2017.  During the Subcommittee meeting on April 26, 2017, Senator Bright Matthews (attorney) abused her power as Chair and skipped over at least two Pro-Personhood speakers on the sign-up list, including a Christian woman with 34 years experience as Director of the Care Pregnancy Center, who was prepared to speak on her experience dealing with clients regarding the DAMAGE DONE TO WOMEN BY “ABORTION”.  So this Pro-Personhood testimony was blocked from being heard in the April 26, 2017 Subcommittee Hearing by Senator Rankin’s pro-“abortion” chairwoman. ]

[ In 2017, Senator Rankin waited over two months to even assign S .217 to a Judiciary Subcommittee, until March 22, 2017, after then-Senator (now SC Lt Gov) Kevin Bryant had introduced S .217 on the first day of the 2017 Legislative Session, January 10, 2017.  Read more details of Senator Luke Rankin’s delaying tactics, “slow-walking” S .217 through the entire 2017 Legislative Session here and here and here.  In 2018, the South Carolina Legislature convened on Tuesday, January 9, however the Senate Judiciary Committee was not called by the Chairman, Senator Luke Rankin (R-Horry), to meet on January 9, nor on January 16, nor on January 23 !  The January 30 meeting of Chairman Rankin’s Senate Judiciary Committee was the first meeting in 2018.  Under normal procedures, legislation should be sent from the SC Senate to the SC House by April 10, and the END of the regular 2018 Legislative Session of the SC Legislature is May 10.  Has Senator Rankin already begun successfully “slow-walking” S .217 in the 2018 Legislative Session to consume precious time needed for debate and passage ? ]

“I am a Republican, pro-life [ sic ], and [ Roman ] Catholic.  I do not want to vote against a bill that encourages pro-life, but this bill is so far out of bounds as far as its constitutionality, I don’t think it can be retrieved,…”

“The bill says life begins at conception, *** and at that moment an embryo has all the rights as any other citizen. **** Several senators, including Republicans, said similarly-worded legislation in other states has been found unconstitutional.” *****

*** No the bill does NOT say “life begins at conception” !!!  The word conception is never used in the bill. The bill says the RIGHT to life  (due process, equal protection) is vested at fertilization !!!

**** No, the bill does NOT say an embryo has ALL the rights of another citizen, the bill says (only) the RIGHT to LIFE is vested.  The State article is incorrect about vesture of ALL citizen rights at conception (fertilization). The Personhood bill S .217 as written vests only the right to life at fertilization, not the rights of liberty and property.

***** Missouri (effective 1988) and Kansas ( 2013) passed legislation which would recognize the rights of the unborn to be the same as “other persons”, but subjected their statutes, in the text of the statutes themselves, to the “decisional interpretations … by the United States Supreme Court”, and so child-murder-by-“abortion” continues in Missouri and Kansas to this day.  No State in the U.S.A. has yet passed a real, true Personhood Bill or Amendment.

Further errors or omissions in the article:

1) The 20 co-sponsors of S .217 are not all Republicans, there is one Democrat, so far – Senator Kent Williams.  There should be more, including Senator Darrell Jackson, a pastor, and Senator Glenn Reese, a present or former Baptist deacon.

2) The article fails to mention Gov McMaster, Lt Gov Bryant, and another candidate for SC Gov on 2018, Yancy McGill all spoke at the Personhood Day event Wednesday, January 24 at the SC State House.

3) Lastly, the article does not mention 2018 SC GOP candidate Catherine Templeton does NOT support the Personhood Bill S .217, because she supports “exceptions” to a ban on child-murder, i.e., her un-Biblical, immoral, and unconstitutional position, is to allow the continued murder of certain children in the womb based upon the circumstances of their conception.  By definition therefore, Catherine Templeton is NOT “pro-life”.  Even Webster’s and Black’s Law dictionaries define “Person” as “A human being.”

Personhood Report: In Law, No Exceptions to Human Personhood
http://christiansforpersonhood.com/index.php/2018/01/30/personhood-report-in-law-no-exceptions-to-human-personhood/

‘STANDING IN THE GATE’

“So I ask at the first available opportunity, that we deal with this question:  ‘Who qualifies as a member of the human community, and is deserving of legal protection?’  It is a question that this body needs to debate fully on this Senate floor and to vote on.  Thank you very much.”

Senator Cash’s remarks to be printed in the permanent record of the Senate Journal, January 25, 2018:

Senator CASH rose for an Expression of Personal Interest.

Remarks to be Printed

On motion of Senator DAVIS, with unanimous consent, the remarks of Senator CASH, when reduced to writing and made available to the Desk, would be printed in the Journal.

The SC Personhood Bill S.217 is listed first on the SC Senate Judiciary Committee meeting Agenda for Tuesday, January 30, 2018, at 11am in the Senate  Gressette Bldg, Rm 105 (seats approx. 100).
[ The Senate Gressette Bldg is located to immediate rear of the SC State House, on the southwest side. ]

Please come early (recommend 10am) and help pack the room with Christian, Pro-Personhood supporters. As you arrive, recommend you sit as close to the front of the room as possible.  Personhood South Carolina will be providing “PERSONHOOD NOW” stickers at the door of Room 105, which you may place on your lapel.

Chairman of the Senate Judiciary Committee Senator Rankin, and Senator Senn have not yet agreed to support S.217. 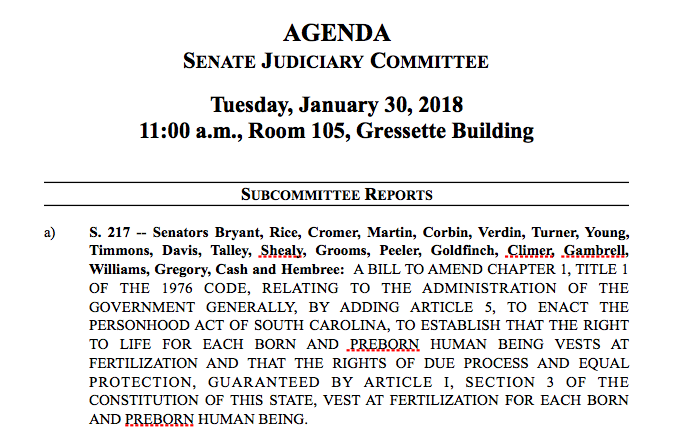