“Bad Fruit” of Years of Ecumenical Compromise and Disobedience to Biblical Doctrine of Separation:

Southern Baptists rightly declare their belief in the inerrancy, authority, and sufficiency of God’s Word, the Bible.

How is it then, June 16, 2021, SBC Convention Messengers voted to compromise the “Abortion” Abolition Resolution by also still holding onto unjust, unbiblical, incrementalism ?

For decades, evangelicals have yoked up with Roman Catholics, and followed the lead    of  Vatican-proxy National Right to Life in pursuing the incremental regulation of    child-murder by “abortion”, instead of APPLYING GOD’S WORD, and seeking first and foremost to Establish Justice to END child-murder.  Joining with and following those who do NOT hold to the Bible as the final, supreme authority has been a disaster.

This Is Why “Abortion” Is Still “Legal”:
Roman Catholicism

‘The Ruinous Ruse of Rome’

Completed*** Christians for Personhood Candidate Surveys have been received from (in order sent):

*** Candidate Questionnaire incorrectly filled out by John Gallman (R), candidate for Senate District #33. Candidate marked “Yes” to Question #2 [2. Incremental Legislation Regulating Child-Murder by “Abortion”], however he continues to affirm his support here on his campaign facebook page (May 25 post), for incremental legislation regulating child-murder by “abortion” [ i.e., the so-called “Heartbeat” Bill ] Given John Gallman’s position, the correct answer for him to Question #2 would therefore be “No”.

The “Heartbeat” Bill, in addition to Rep. Nancy Mace’s selectively pro-“abortion” exceptions amendment to H.3020, saves NO unborn children prior to the detection of a heartbeat at approximately six weeks gestation. The “Heartbeat” Bill has a HUGE EXCEPTION:  It allows the killing of ALL children prior to about six weeks. Life begins at conception (fertilization), NOT detection of a heartbeat. The “Heartbeat” Bill is NOT a pro-life bill, it is a bill which incrementally regulates child-murder by “abortion”. Being “pro-life” is agreeing with God on the Sanctity of Human Life which HE HAS CREATED. (Genesis 1:27,  Exodus 20:13, Leviticus 20:3, Matthew 19:18, KJV).  “Good” is the Enemy of God’s Best.   The “Heartbeat” Bill is the Enemy of the Personhood Bill.  Personhood is Abolition. However, in the 2019-2020 Session, the incremental “Heartbeat” Bill was chosen to advance instead of the Personhood Bill H .3920 by the fake “pro-life” Republican establishment leadership in the SC House.  Multiple incremental bills have been passed in the SC Legislature since 1990, and yet from 1991 to 2018, the murders of over 212,000 unborn children in South Carolina have still been reported by SC DHEC.  That is NOT “pro-life” !!!  Personhood legislation was first introduced in both the SC House and the SC Senate in 1998, twenty-two years ago !!!  Personhood legislation has been active in the SC Legislature, in at least one chamber, every year since, and since then, from 1999 to 2018, the murders of over 129,000 unborn children have been committed in South Carolina, as reported by SC DHEC.
[“Abortions” by Occurrence in SC: 1998 – 2014; 2015; 2016; 2017; 2018]

To borrow and adapt Abolitionist William Lloyd Garrison’s words on “gradualism” versus “abolitionism” regarding American Slavery:  Incrementalism in theory is the perpetuation of child-murder by “abortion” in practice !
Has not that been the experience these last 47+ years which have witnessed 62+ Million reported dead ?
PASS PERSONHOOD [ H.3920 ] NOW !!!

This reporting of these Candidate Survey Results does not constitute the giving of any endorsements by Christians for Personhood.

However, it is a great encouragement to see several candidates take a strong, principled, Biblical stand for the Sanctity of Human Life.  It would be a welcome day indeed to see many House/Senate candidates with 100% survey positions, and so subsequently, Lord willing, to see more such elected as
House Representatives/Senators sworn in to the House/Senate for the 2021 Session !

In addition, it should also be noted, as important, inviolable, and essential as a candidate’s position is regarding the Sanctity of Human Life (Genesis 1:27, KJV), and the Creator God-given unalienable right to life (Exodus 20:13, Matthew 19:18, KJV), there are also other Biblically-based  qualifications for civil rulers.  For example, see Exodus 18:21 and 2 Samuel 23:3, KJV.

[ Report ]
Without the Fear of God, SC Legislature Fails to Depart from Evil …

On May 12, BOTH the Republican-Super-Majority SC House and the
Republican-Majority SC Senate passed final version Continuing Resolution for
the State Budget with Selected “Abortion” and Planned Parenthood Funding !

[ Report ]
Do the Legislators in SC Reckon with the Fear of God ?

On April 8, BOTH the Republican-Super-Majority SC House and
Republican-Majority SC Senate passed Continuing Resolutions for
the State Budget with Selected “Abortion” and Planned Parenthood Funding ! 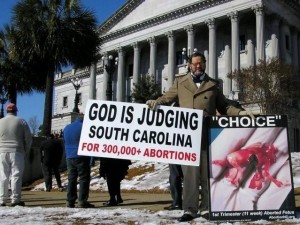